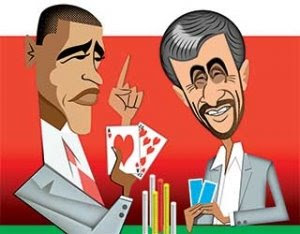 I began writing this in response to a post over at HILLBUZZ. When I reread it, I thought it merited it's own blog post. So, I'll quote myself here, and then I'll expound.

I believe that, when one observes repeated “mishaps” one can only conclude that they are intentional. I did not take the "dissing of Gordon Brown" seriously, to be frank. I saw the Obama gift gaffe as evidence of inexperience and ignorance. But, now we have this Chirac/Sarkozy incident as well???

Too many high level faux pas to NOT pay attention. Even if we assume that Mr. Obama does not know what he is doing, he DOES have access to advisors. No?

The one international communique that Mr. Obama did not seem to flub up, was the Iran address. And, yet, THEY have snubbed him.

I am going to venture a guess that Obama’s plan was to cozy up to the Islamic nations of the world … by off-handedly dissing the Western “powers that be.” Only thing is... Iran does not really want to get cozy with the U.S. Because it knows in a matter of time the usurper ‘n chief will be ousted. And then what? They'll be cozy with whom???

This is a very serious situation, IMO. It is worse than the crisis Biden predicted.

I speak as a hypereducated Feminist when I say that what we are seeing here is the natural evolution of post-feminist, post-racial, post-progressive thought. Sadly, everything the Western Enlightenment stands for is now viewed by intellectuals to be suspect. Accusations of "ethnocentrism" taint everything within the hallowed halls of the University. England, France, The U.S.A. ... are all "evil."

We stand on a dangerous and historic precipice. Very few of the educated elite have the clear-mindedness to see what we are doing to ourselves. Worse, we in the U.S. have elected a bumbling neophyte to show us the way. Obama now seems hellbent on alienating what remains of our natural allies. After eight years of a Bush administration, the hallmarks of which were hubris and deceit, that's not going to be difficult for him.

H/T to Phyllis Chesler and Marcia Pappas for shedding a light on what the rest of academia is ignoring. By the time we heed their warning, I fear, it will be too late.

Image Credit (The article is worth a read as well, especially the responses.)
Posted by Stray Yellar Dawg? at 6:32 AM