What Doesn't Kill Us Will Make Her Stronger : Hillary to Sarah Converts Have Been Around This Block A Few Times 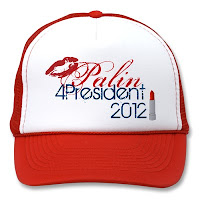 I was happy to read about the growing Democratic support for Sarah,
at HILLBUZZ today.

"We chuckled when we read the piece in Talking Points Memo because we’re coming from two different places, but arrive at the same conclusion. The TPM piece is WARNING Democrats to stop attacking Palin lest they make her President in 4 years. We think these lunatics should continue to attack Palin, because very soon someone on Team Sarah is going to find a way to really endear Palin to many Independents and Moderate Dems who won’t want to associate with liberal loons who engage in this sort of thing.

Who knows to what higher office Independents and Moderates will send Sarah Palin to punish the liberal loons?

We have a saying around here: sometimes the universe sends you the wrong French toast; you didn’t get what you wanted or ordered, but in the end, you end up getting an adventure that takes you somewhere unexpected you never dreamed you’d go.

All the nastiness, pettiness, and downright evil Obama supporters continue to fling at Sarah Palin are, collectively, a heaping helping of the wrong French toast."

And then my own response to HillBuzz:

Such a wonderful essay! And, yes, I am one of those Independents/ former Democrats that doesn’t want to be associated with this kind of crazy. So I have joined Team Sarah … and I am fighting for her. Just the way I did for Hillary.

Don’t write Sarah off when it comes to gay issues. Sarah will uphold the law, and the constitution. She has recently appointed a “pro-gay” “activist” judge to the Alaska Supreme Court.

This is not because Sarah (or her appointee) are “gay activists” BTW. It is because the law is the law. And fair is fair. We (I am the mom of a gay son) will win in the end.

Long live Sarah Palin! What doesn’t kill us, will make her stronger. And, us Hillary to Sarah converts ain’t the type to lay down and die!
Posted by Stray Yellar Dawg? at 7:01 AM