The PUMAsphere is Split, But I have Made Up My Mind: Sarah or Hillary Are Fine By Me 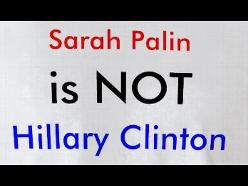 Listen, PCness is not easy. It comes more easily to folks that are schooled at Hahvahd and such. But even they can screw it up. (As did Obama in more than one situation.) This is the cost of putting political neophytes on the fast track to national office. The learning curve is steep. Hillary and Mac had both mastered the lingo. Ivoted for both of them. But they both "lost." That is life in the American Idol milieu that the citizenry allows to dominate it's politics.

I have heard Sarah, in her own words, say that abortion should never be criminalized. I believe that was under the intense pressure of Katie Couric... for her to say otherwise.

I really wish that my PUMA friends would be more careful about going back in time and pulling out quotes from a Sarah Palin that was campaigning before only Wasillans, or even Alaskans. Times change. Even for Pols. Sometimes... the change happens at warp speed, right before our eyes. (Just as it did with Obama, who essentially gave a couple of speeches and hired an Ivy League speech writer as his qualifications for the highest office in the land.) Sarah is learning. Faster than most of us could.

I will support Sarah or Hillary. Whomever runs for the White House FIRST.

I really do not need to come to the PUMAsphere, day after day, for a synopsis of Palin's shortcomings. I am aware of them, as are most... if not all... PUMAs. We are the smart ones. Remember? We read and listen to original sources as a matter of policy.

I am simply drawing a different set of conclusions from the ones you may be. That doesn't mean I am stupid.

Honestly, though, I can get plenty of "education" about Palin's shortcomings from outside of my PUMA family. If I want that, I'll look for it. Just Sayin'...

It's getting a little bit preachy in here.