Sarah Palin, Debbie Rowe, And The Myth of "The Bad Mother" 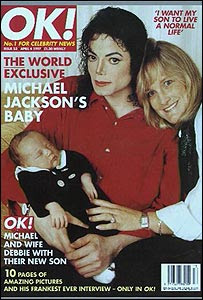 When I was on the road over this past weekend I had the rare "opportunity" to watch cable television. Teevee is actually a macabre and distorting experience for me. I reserve it for my time in places like airports and hotels. And I try not to take in too much of it. Ever.

Did you know that, in airports, you can see nothing but CNN? At every turn there is a wide screen T.V. Blasting the latest "news." Then, if you settle into a restaurant along the beaten path, to dine on pizza and salad... there it is again. Michael Jackson this. Sarah Palin that. Over and over. Blah, blah, blah.

After a full day of airports and restaurants, if you are like me, you check into your hotel suite. (Suite because you want to prepare your own food.) Low and behold, THREE televisions await you there as well. One in each room. Wide screens. Facing each bed and the kitchenette. Beckoning. Unavoidable.

When I was doing graduate work, in the 1980s and 1990s, I became aware of a particular typology known as "The Bad Mother." Because I was, not only a working mother myself, but also a mother/baby nurse working on a graduate degree in Family Science.... the stereotype fascinated and disturbed me. I read quite extensively about it. Became sensitized to it's many manifestations in society.

Long story short, I've developed quite a finely tuned radar for the kind of disempowering "Bad Mother" language and logic that permeates our culture. OK. Now back to my weekend with cable teevee...

Did you know that both Sarah Palin and Debbie Rowe are shining examples of how "Bad Mothers" are bringing this country down? Their propensities to defend their own children against the Man Stream Media is what makes them sisters in the cause, it seems. Neither one of them really cares about their kids, so the story goes. They are both "ambitious" in one way or another. Seeking fame, or money, or both. At the expense of their children.

No one really wants to know what either of these two moms would do for the sake of their children. If asked, I am sure they would tell us. But, the MSM, and to some extent the Third Wave of Feminism, prefers to trip the "Bad Mother" meme. Once it is tripped, women like Palin or Rowe become scapegoats for all that was wrong about the mothering that the collective "we" received (or didn't.) Mere receptacles for the anxieties other women have about their own abilities to mother. (Who can blame us for having fears and worries? None of *us* wants to be labeled "The Bad Mother.")

Fact is, if we did not have Sarah and Debbie as receptacles for our fear and self-loathing ... we'd need some other mother to unload on.

One bright spot in all of this may be, former "Bad Mother" Hillary Clinton may get a break.

Sadly, the disempowerment of all mothers, through the "example" of Hillary Clinton's silencing is a subject that begs for future analysis. Her virtual "disappearance" from the national stage is a loss for us all, because it's a recipe for how we might each become a "good mother." By shutting up, and taking a back seat to the "good fathers" in our lives.