The Problem With These Books Kids Are Expected to Read Is... 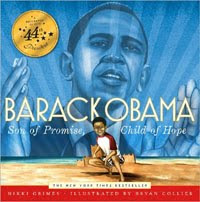 ... they are published BEFORE the President's death. Even BEFORE he is out of office. Probably BEFORE he even entered the White House.

This is the kind of thing that we are accustomed to reading about George Washington or Abe Lincoln. Is it not?

It seems to me that it is OK to engage in a certain amount of "hero worship" where *former* presidents are concerned. We expect eulogies to be glowing for the most. But, to take this unaccomplished neophyte, while he has been in office less than a year, and write about him this way.... It's premature to say the least.

I mean, what if Barack Obama is NOT who the biographers think he is? What if he has sex with an intern next week? Or starts an unnecessary war?? What if he lies under oath and is impeached???

There are good reasons why these types of glowing "biographies" are written post-humously.