With Any Luck At All, The Fourth Wave Will be of the Anthonian/ Stantonian Variety 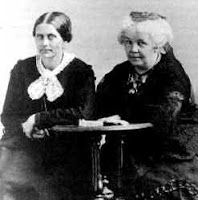 I was musing about Behar and Barr, dissing Sarah Palin with their anti-women, cough, "Feminist" nonsense, as reported at Bloghopenchangery this morning.

Then thinking about the good sense being promulgated at Legal Insurrection, I had this revelation.... and posted it in response to the latter:

Sarah is well on her way. She is appealing to a younger generation of conservatives. And particularly young conservative women.

That can't be a bad thing for Conservatives as a whole. Can it?

I am gonna go one step farther and say that the GOP should be bowing at the altar of John McCain for lifting Sarah from obscurity to be the new face of Conservatism. There is so much genius in that ... I can't really cover it all here. Except to say ...

Liberals have lost their way where feminism is concerned. Sarah has arrived on the scene at a time when she is sorely needed for the next generation of young women. Just as the Third Wave of Feminism has crashed upon the shore with an epic FAIL, by trying to embrace too much "diversity" and "cultural relativism."

The Third Wave's embrace of all things Islam is the harbinger of it's relativistic demise. (And I'll add that it's desire to make a pro-abortion stance it's central tenet ain't helping either.)

Sarah represents the return of a Susan B. Anthony/ Elizabeth Cady-Stanton style of Feminism. Call it the fourth wave if you want. But... I like to think of it as a return to the first wave.