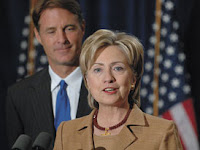 Of course, The Daily PUMA is correct in saying:

"NOBODY resigns one day before the deadline when they are leading in the polls without an ulterior motive." And in reminding us of the shenanigans that went on in the Dem primaries, surrounding the Michigan vote.

Seems angry PUMAs are a force to be reckoned with. Which brings out the rancor from Obama's troops. (Wah. Wah. We tried to warn them.) 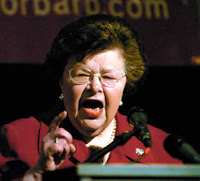 Who is next? Rumors are that Barbara Mikulski will be the sixth incumbent Dem to bow out for 2010. (You may remember her as co-chair of Clinton's 2008 campaign.)

Where exactly will it stop?
Posted by Stray Yellar Dawg? at 6:44 AM