Deathwatch for Keith Olbermann: PUMAsphere and Beyond 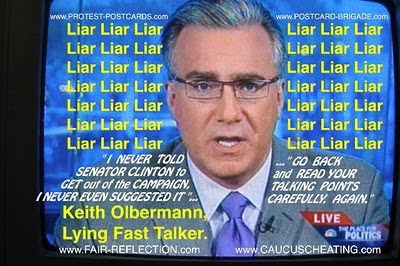 I'll come clean here. I don't often *hate* people. But I'm making an exception for the Liberal Misogynist of MSNBC. (Or at least one of them.)

From the linked article:

"Olbermann does not like women, especially attractive and/or accomplished women. Nor is he particularly fond of men. He is forever the awkward, angry teenager of his high school days who mystified psychologists, the überdork whose cruel taunts of the athletes he covered as a sports broadcaster were legendary, even as he yearned to be thought of as the stud that covers studs. Give it up, a Philadelphia Inquirer sports columnist suggestedafter watching Olbermann ridicule the appearance of an overweight athlete. He noted that the hefty lefty is “so bloated he looks as if he swallowed Dan Patrick [his ESPN co-anchor] back in 1997.”

Women are anathema to Olbermann. He delights in demeaning them, and the more attractive or accomplished they are, the more malicious he gets. Conservative Congresswoman Michelle Bachman, who relishes her role as policymaker and mother, is a frequent object of his anger; columnist Michelle Malkin is a “big mashed up bag of meat with lipstick” because of her intelligence and traditional values; Sarah Palin is> a moronic “Bush in a skirt”; and there’s nothing wrong with Hillary Clinton — who had the nerve to oppose Barack Obama in the Democrat primaries — that a good beating won’t cure."

For me, really, the Olbermann hatred began when he called for Hillary to be beaten senseless by a Democratic Superdelegate. If I'd had an Olbermann voodoo doll here at that time, I'd have begun sticking pins in it. No matter, though.... cuz apparently somebody else did it for me.

So now the woman hater has the audacity to claim that he "never even suggested Hillary should drop out of the primaries." Uh-huh. The man thinks we do not have youtube?

Well, here's news for ya Keith-O. We *do* have youtube. And and we can also follow cable ratings. There isn't a PUMA alive that won't rejoice when you get the boot. And there are few women ... of any political stripe... that won't be dancing in the proverbial streets.

Of course, Conservative men won't be cryin'about your demise either.

So who is left to mourn your loss? A few pimply faced blogger punks in their mother's basements? Your woman hating "progeny?"

Alas, that's what happens when ya alienate 51% (or more) of your viewers during a primary season.

There's nobody left to watch you. Boohoo.