It Takes Guts To Stand Up to the Patriarchy of the Church, Especially if You Are a Nun Stepping on Stupak 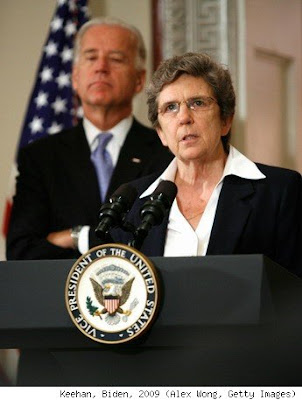 I am sure I won't agree with every word the good Sister utters. Nonetheless, I'll chime in with a "Go Sister!" As a former Catholic who spent a lot of years being educated by nuns, and even more working for them, I can vouch for the fact that Sister *is* probably correct about how her own patients will be impacted by the current bill.

It is her business to know. And, if Sr. Carol is anything like the nuns I've worked for in Ohio... she is a walking actuary. Just sayin'.

From the linked article:

"Keehan's stand puts her in direct conflict with the Catholic Bishops and so far there has been no reaction from them.

The fact that the bishops are all men and that Keehan is a woman will also not be lost on people on both sides of the debate and will probably spell defeat for the bishops and Stupak politically in the rejection of their amendment."

I tend to agree. I just hope the good Sister does not get the boot from the vatican. Life as a Daughter of Charity would not have allowed her to have her own 401K or anything. Retirement through excommunication would be brutal. Not to mention unfair.
Posted by Stray Yellar Dawg? at 5:34 PM