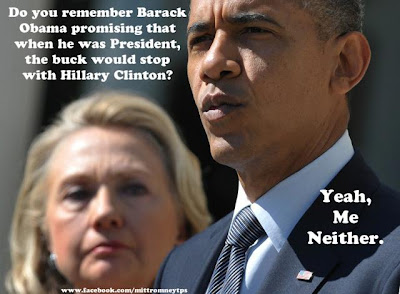 “Now look, It’s all HER fault”

Pretty much says it all.

I am SO DONE with the Obamacrat party. '

STATEMENT BY SENATORS McCAIN, GRAHAM AND AYOTTE ON SECRETARY CLINTON’S COMMENTS THIS EVENING ON BENGHAZI ATTACK


“We have just learned that Secretary of State Hillary Clinton has claimed full responsibility for any failure to secure our people and our Consulate in Benghazi prior to the attack of September 11, 2012. This is a laudable gesture, especially when the White House is trying to avoid any responsibility whatsoever.

“However, we must remember that the events of September 11 were preceded by an escalating pattern of attacks this year in Benghazi, including a bomb that was thrown into our Consulate in April, another explosive device that was detonated outside of our Consulate in June, and an assassination attempt on the British Ambassador. If the President was truly not aware of this rising threat level in Benghazi, then we have lost confidence in his national security team, whose responsibility it is to keep the President informed. But if the President was aware of these earlier attacks in Benghazi prior to the events of September 11, 2012, then he bears full responsibility for any security failures that occurred. The security of Americans serving our nation everywhere in the world is ultimately the job of the Commander-in-Chief. The buck stops there.
Posted by Stray Yellar Dawg? at 6:54 AM