It Is Not About Hillary Anymore, It Is About NOT Hillary

I was proud of Hillary Rodham Clinton yesterday. The way she handled her SoS hearing was, as all of her endeavors are, impeccable.

Of course, we have to go outside the mainstream to understand just how strong and intelligent Ms. Clinton was. Quite honestly, I am as tired as is Rev. Bergman.. of the "Hillary Hate." I am fatigued from hearing the MSM talkers, over and over, question Bill's foundation. How will it impact Hillary's work? Blah, blah, blah. As if no spouse of a diplomat has ever done overseas business before.

Further, I am sick to death of Yahoo slathering photos like this on their home page: 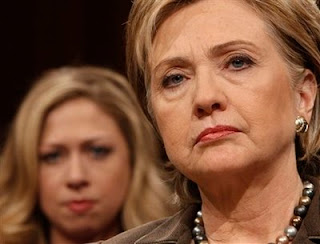 I mean, seriously... of all the photos in their bank, THIS is the one that pops up when I open my e-mail? C'mon boys.... you're not covering your propaganda very well. I can so clearly see that you want me to be afraid... so afraid... of the Clinton Women.

So, this morning I opened up my "news" from The Confluence. (No thanks on the Yahoo reports from AP fellas.) I got to thinking.... ya know, it's true... for me.... IT'S JUST NOT ABOUT HILLARY ANY MORE.

No. It is not about Hillary anymore. It is about NOT Hillary. What her absence from the position of POTUS means to me, and the rest of our god-forsaken world. A world so in need of healing and peace.

It’s about a world where women and children suffer the abuses of corporations at a more profound rate than do men. Where women are paid less for doing the same work. Where women are expected to care for their children with those lower salaries. Often, bearing the burden alone.

It’s about what happens when one, high profile, woman helps us carry that burden. She tries to help us all rise up from under it. And then other so called "feminists" join with our oppressors and keep her down. While elevating a man who has done nothing… AND I DO MEAN NOTHING to advance the causes of women and children.

It is not about Hillary. It is about NOT Hillary. That is what it’s about.

And it's about why I have to ORDER THESE BUTTONS, and wear them to raise consciousness: