The War on White Women: Day Six of the Letterman Saga 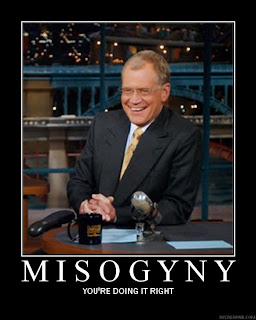 It was PUMA For Life that called my attention to THIS quite excellent article by Andrea Peyser at the New York Post:

"While you were watching David Letterman -- a bitter guy who never saw a woman or a Republican he could stand -- trash Sarah Palin's 14-year-old daughter by "joking" that she was date-raped by Alex Rodriguez and stalked by Eliot Spitzer, you may have missed the memo. Dave's in good company.

His struggling brother up the dial, Conan O'Brien, on Thursday night was having a blast slurring women and Jews -- two groups that may constitute the last permissible sick-comedy staples."

"women, specifically white women, make up the last group that one may freely stereotype to get a cheap laugh.

Not surprisingly, the left has been notoriously silent on the issue. Where are the marches? The boycotts? The National Organization for Women did elect Letterman into its "Media Hall of Shame." How scary.

Letterman replied that he thought he was joking about the sex life of Palin's 18-year-old daughter, not the 14-year-old!"

"How scary" is right!

If you hop over to Women State you can see where a large part of the problem lies. Apparently, certain "men of color" have determined that white women have never really been targeted the way they have. Therefore, jokes about adult Latino men having public sex with 14 year old white girls are not as bad as, say, jokes about black men eating watermelon.

(Whatever, Al. Never mind that I, and many others like me, have defended your positions over the years. Just as Susan B. Anthony and Elizabeth Cady-Stanton once defended Frederick Douglass' right to vote. Until he brushed them aside.)

History does, indeed, repeat itself.

On the bright side, though:

PUMA PAC reports on the state of the Letterman apology. It has evolved to be a bit more sincere, in the wake of the "Fire David Letterman" movement. But, there is still work to be done!

And, Tennessee Guerilla Women are reporting that an interesting thing has happened on "The View." Apparently, Ms. Behar was afraid she might get the same boot in the butt as Mr. Letterman. So she is changing her tune a bit.

Finally, a word of encouragement from Murphy at PUMA PAC:

What about today's protest? Anybody have an updated report?

PS. Thanks to HILLBUZZ for the poster art.
Posted by Stray Yellar Dawg? at 5:37 AM