At Least She Has The Courage to Quit: Go Get 'Em Sarah!

I have just returned from four and a half days on the road, studying the history of America's First Wave Feminism, in Seneca Falls and Rochester. Believe me, I am in no mood to put up with any lies about another qualified woman's political motives or intentions. (H/T to Cynthia Yockey for that link.)

UNLIKE SOME POLS WE KNOW, Sarah Palin has far too much integrity to play hooky for the next 18 months. Nor will she allow the State of Alaska to pay for a never-ending string of legal bills to defend her against frivolous ethics accusations and character assassinations.

Ms. Palin is fully capable of fighting her own battles, thank you.

Sorry about the lack of food for HUNGRY MOONBATS round here. Be forewarned, ya'll. This ain't no Third Wave haven for fawning over half-qualified, socially attractive males. "Liberation" through prostitution is not the way Stray Dawg rolls. Palin bashing is off limits here. (As it would have been in the homes of Susan B. Anthony and Elizabeth Cady Stanton.) 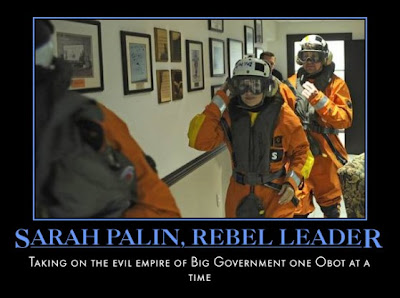