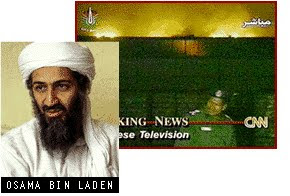 Yesterday I said I wasn't going to weigh in on the Van Jones situation.

Today I found THIS and thought it worth noting here.

``This is using dead Third World bodies to cover up his own unzipped pants,'' declared Van Jones, director of Bay Area PoliceWatch, an organization that until now has focused on alleged misconduct by law enforcement officers. Jones spoke at a demonstration at Powell and Market streets in San Francisco that drew 400 people, according to police estimates.

The theme that Clinton took military action to distract public attention from the Monica Lewinsky affair was highlighted in a protester's sign in Palo Alto that read, ``Don't let a wartime incursion be Clinton's diversion.''

(Of course) There was scant mention in any of the demonstrations about the events that precipitated Clinton's action: the terrorist bombs that exploded at the U.S. embassies in Kenya and Tanzania on August 7 that killed 251 Africans and 12 Americans.

I'm still not going to take a stand on the Van Jones "removal." I don't see any reason to. His mere presence among Obama's Czars speaks for itself.

I will say this much, though. Take it for what it is worth... If any PUMA is standing against Jones, and behind the Obama administration on this "dismissal"... I will understand.

(Oh and, I might add, this group of "Czars" in the White House??? Not anything I recognize as coming from *my* party of 30 years.)